4K UHD  Televisions have hit the mainstream and prices have plummeted.  Now is the time to upgrade.   All manufacturers have made them much more affordable because they want consumers to know that 4K is replacing 1080p HD TVs.  Do not ‘upgrade’ to another 1080p HD TV.

So, what is the difference and what do you need to know in order to make an informed decision about whether or not to upgrade.  Another option is for you to stick with the classic 1080p HD TV.

The difference between these two technologies is simply a difference in overall pixel count.  A 1080p HD TV contains about 2 million total pixels.  Whereas, the new 4K TVs are able to display a resolution of 8 million pixels.  That is FOUR times more pixels than 1080p HD.  It makes a huge difference in the quality of the picture image.  The picture looks that much more real and true-to-life than HD does.

Don’t misunderstand, there is nothing wrong with 1080p HD TVs.  We welcomed them with open arms back in the early 2000s when we all switched from Standard Definition (SD) to High ).  Not only did we drastically improve the picture image with a much higher resolution, but we also got rid of those bulky, hideous, large and very heavy tube box TVs.  It took 3 grown men to move one of those larger tube boxes.

Consumers were shocked when they first saw a flat panel HD TV.   They were lightweight, slim and could be hung on a wall or over a fire place.  It was awesome to experience this upgrade to HD from SD.  Compared to SD,…HD offered a crisp and clear picture.  It was defined with color and depth.  A major improvement over tube boxes.

However, technology never ceases.  After 15 years of enjoying flat panel HD TVs….it is time for another upgrade.  Consumers welcome this upgrade as well.  Many people including myself thought that we would never see anything better than High Definition.  This was because HD was so much better than analog Standard Definition displays and our eyes had never seen something so real-looking on a TV display screen.

4K TVs are not much different than 1080p HD TVs.  They are both flat panels and can be hung on walls.  They are both very slim and lightweight.  The biggest difference (and its a BIG one) is in resolution.  This refers to the picture image quality and how many pixels it takes to produce a moving image.  4K has FOUR times as many pixels as 1080p HD.

The word “Ultra” was added to “High Definition” which gives us Ultra High Definition or UHD.   4K televisions which are {4,320p) in resolution, displays over 8 million pixels – therefore, this gives us the label  “4K”.  The pixel amount is rounded to ‘4’, but it refers to 4320 in vertical pixel resolution.  1080 HD does the same thing.  It is also known as “2K”.

How good the picture image is depends on how the movie or TV show was filmed.  Filming a movie is also known as “mastering” in case we refer to it.  If a producer uses a 2K camera system, then it is known as a 1080p High Definition film.  If they use a 4K camera, then it is a real or native 4K Ultra High Definition film.  It all comes down to what kind of camera system is being used.

Obviously the absolute best picture image on a 4K TV is going to be a film that was mastered using 4K cameras.  However, there are films that are in between 1080 HD and 4K UHD.  These are known as films that have been UPCONVERTED or UPSCALED.  These two words mean the same exact thing.

Producers can take any film that was at least mastered in 720 or 1080 High Definition and UPSCALE it to a higher resolution.  Basically it is using all those extra pixels that 4K provides.  Then, they label this upscaled film “4K”.  However, it is not real 4k.  It is not fully 4K.  The picture image is better than 720 or 1080 HD (which it was originally mastered in), but not full 4K.  It is somewhere in between as far as resolution is concerned. 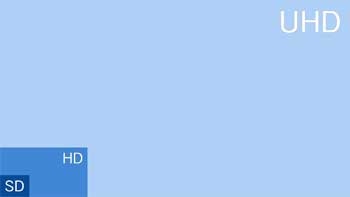 Many of the films that are listed under “UHD” on Netflix are upscaled films.  They were filmed using 2K cameras and then digitally enhanced to fill the many 4K pixels available.  However, there are more and more movies and TV shows being filmed with 4K cameras.  All of the newer shows and movies are real native 4K.

*Check out our page on “REAL or FAKE 4K”.  It verifies most movies and how they were filmed.  This way consumers can know exactly what they are watching.  They can get the best out of their 4K TV by choosing native 4K films.  This way people will not be disappointed in their new 4K.  Some consumers think that everything they watch on their new 4K TV will be at the highest possible resolution and this is simply not the case.

ALL 4K UHD TVs doe upscaling.  As long as the film has a minimum of 720 or 1080p pixel resolution the TV will automatically digitally enhance or upscale it for better viewing.  This is one great reason to upgrade to a 4K TV now.  You can begin enjoying a better picture quality than what a 1080p HD TV provides.

Now, let’s move on to what you need to consider when upgrading your television:

While 3D was one of the reasons for the first production of the 4K resolution, we believe the most important consideration for you the consumer is the upscaling of 1080p and standard def signals to the native resolution of the panel. As we saw with Sony’s awe-inspiring X950B series, if the TV has a great local dimming backlight system (LED) and an exceptional 4K processing engine, you can get a fantastic 4K-like picture even with 1080p and 720p content. This is especially true with the dearth of 4K content that was released last year. There are promises of more coming through YouTube, Netflix, and Sony Studios, but so far there has been little.

I’m glad that processing is important again. It’s a much overlooked quality feature in TVs, but it is critically important to your picture enjoyment.

Vizio introduced a very cost effective 4K UHD TV recently with the P-series models. Pricing is compelling even if you do not plan on watching a 4K signal. For example the Vizio P552ui-B2 is priced just above a 1080p HD models at just $999 and just $1298 for the 65” version. While Vizio’s video processing engine is overamped, the pricing is too interesting not to consider the upgrade.  At the other end of the spectrum the top Samsung and Sony models can reach into the $3000s.  At that point, even though the picture quality is astounding even when up scaling a 1080p signal.  These prices have dropped significantly.  We paid $2,790 for our Sony 4K UHD TV back in 2014.  This same exact TV today is only $1,300 new on Amazon.  That is more than half the cost that it was 3 years ago.  Our Sony was a 65-inch TV and very large.  $1,300-1,600 is not a bad price for a 4K UHD TV that large.

Research on Amazon.  We  highly recommend Amazon because we saved over $300.  Plus, you avoid annoying in-store sales people and you can read reviews about the TV product from other verified purchasers.

From a design perspective, most all 4K UHD TVs will be receiving the top of the line aesthetic packages, while 1080p HD TVs will be somewhat left in the dust in this regard.  However, it’s not as if a super thin bezel framing and 2” deep TV is bad looking. So, from a design perspective only those that want the best looking and most avaunt-guard TV such as the new curved UHD TVs will need to consider appearance as a buying factor.

Would manufacturers of TVs leave you high and dry to attempt to force you to buy an UHD 4K TV in order to get a better operating system, voice controlled remote control search function, and 3D compatibility with lots of free glasses? You bet they will.  The feature sets on 4K UHD TVs are destined to get stronger while HD 1080p TVs features are relegated. This much was obvious at the CES show.  But they cant cut too much or the discount brands will swoop in and take market share.

Would TV manufacturers stop producing 1080p HD TVs in the larger sizes in order to compel consumers to purchase 4K UHD TVs?  Yes, they are doing this right now.  They are focusing on manufacturing 4K UHD TVs because these are replacing 1080p HD TVs.  This is why they have dropped prices.  4K TV prices are the same as 1080p HD TVs right now.  Another reason NOT to wait to upgrade to 4K.   There are only a few major suppliers of LCD panels, so if they have the opportunity, they might stop making the very large 1080p HD TVs altogether.